It can be pretty hard to stand out in the turn-based RPG genre with plenty of them floating around on mobile, it's a popular mechanic and rightly so. With its amazing soundtrack and rather unique spin on combat, Alice Fiction was released earlier this year to some quite wide acclaim and emerged as a stand out entry in an already populated field.

Set in a multiverse called ALICE, the protagonist mysteriously loses their memory after they log in, and run into a character claiming to be their sister. Almost immediately, however, they are attacked by a monster called a Pawn who unceremoniously dispatches the young lady, before the protagonist is rescued by a fighter named Neu. The player is then dragged into an investigation to discover why these Pawns are appearing, why is the ruling AI dubbed Queen malfunctioning, and how can they recover their memory and sister. 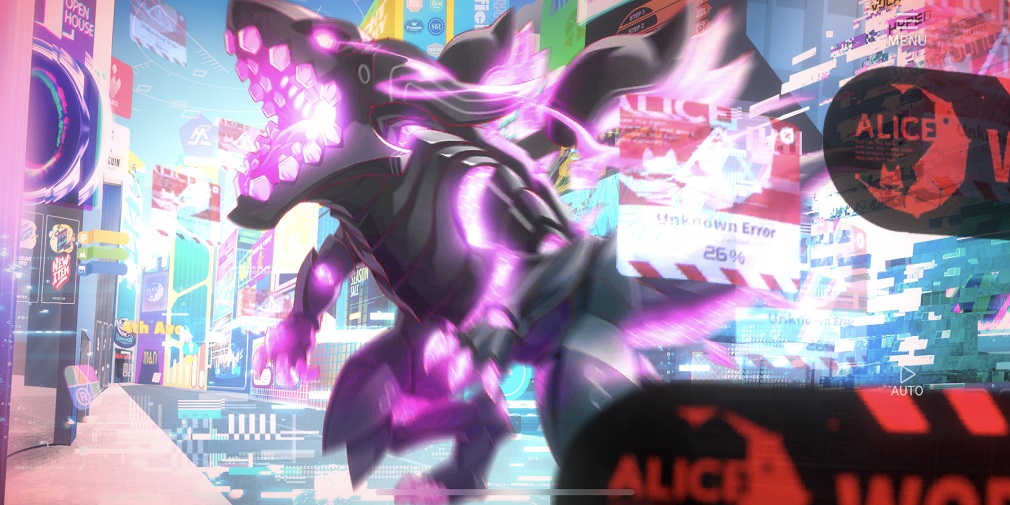 When starting up the game, the music is the first thing to truly jump out and grab you. It is such a happy and engaging tune, and the game's theme song, Un-reality Escape by FantasticYouth, is one of the single greatest themes in gaming. Throughout the whole game, the music remains fantastic and just adds a lot to the experience. It's one of the better introductions to a game I have experienced, and the gameplay is just as exciting.

Whilst the combat does unfold in the usual turned-based style, the way you attack is certainly different. Each character has two active skills they can use before damage starts being dished out. These are usually buffs, debuffs and heals, but can go a bit in depth such as changing the turns panels. After choosing skills, combat moves into a match-3 type of mechanic for determining damage. 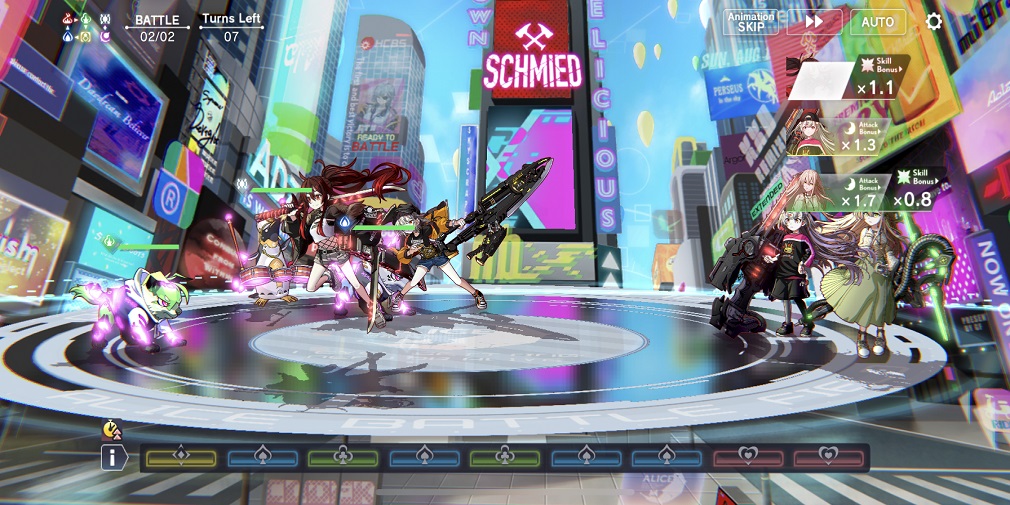 Players will have a certain amount of time to break as many panels as they can, which come in four colours each corresponding to a character in the party. Panels of the same colour that are next to each other get broken at the same time, and if three panels are broken together they turn into a skill panel, which if broken with another two panels of the same colour levels up. When the skill panel is broken, the character will unleash a powerful Crash skill. In practice, it's a very simple system, but with the time limit, it gets very frantic as you try to break the right panels to get combos to unleash the strongest skills possible, or set up the field for a devastating next turn. It is a battle system that never gets stale and is an awful lot of fun. 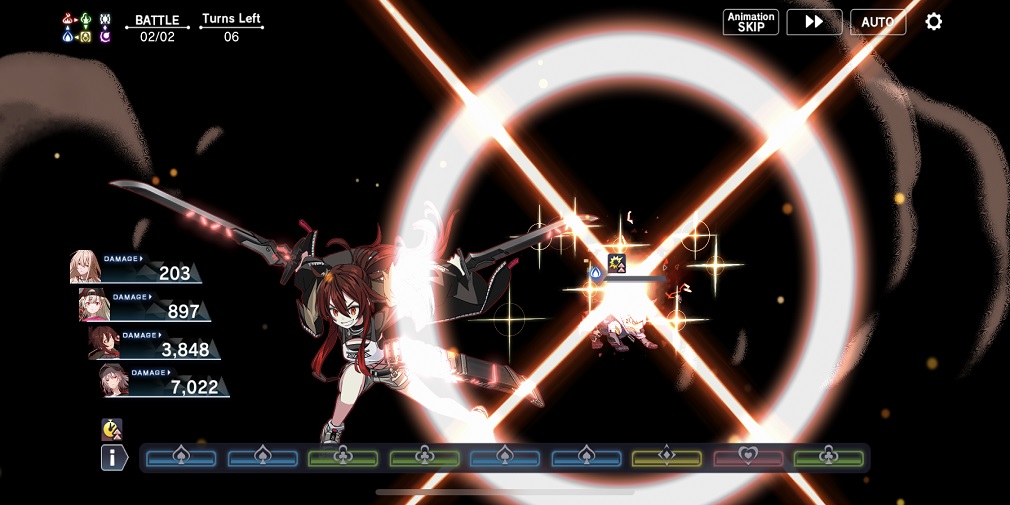 Alice Fiction boasts one of the more involved party systems seen in mobile RPGs, and it can lead to a huge number of strategies. There is a large number of characters to choose from, each of which has four distinct skills; one crash, two active and one passive, and it is the passive that will define party building. A lot of these skills provide more buffs if say the four person party is all Earth element heroes, if the party only has one Attack type character, or if the party is all Special heroes. The buffs are massive and building the correct party to take advantage of them all is very rewarding.

Each character is rated between one and three stars, so what happens when you draw that two-star Perseus and want to use her as the tank because of her awesome skills? Surely that will drag down the whole team and never clear the endgame content, right? Not with Alice Fiction's upgrade system. With this, truly any character can be used, as every character's rarity can be upgraded to 4 stars and bring with it the stat buffs needed to compete in the endgame. 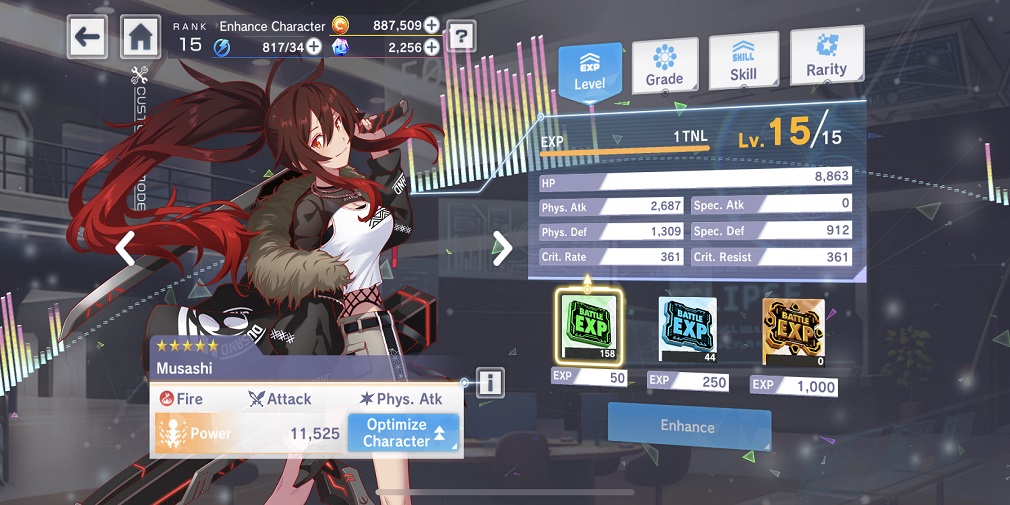 When pulling a character that is already owned, a currency named Anima will be rewarded that can be exchanged for the resources needed to upgrade rarity. More importantly, however, if the player is unable to pull characters that often, the resources can still be farmed via Expert Missions. They can only be done three times daily so grinding would take a while, but at least it's free.

It's rare to find a game that is outstanding in as many ways as Alice Fiction is. The gameplay is innovative, the character system is truly top-notch, and the music is phenomenal. It is all around a fantastic game, and one that is well worth playing.
More about Alice Fiction on