A lot of mobile games play to the classic formula where you can whip out the device and play it for five minutes for a quick blast of dopamine. And, to be fair, Maze Machina does adhere to this formula but only because you will most likely be starting over every three minutes. Arnold Rauers, or Tinytouchtales as he sells himself, has managed to make an equally compelling and frustrating roguelike that is impossible to put down once you start.

Maze Machina places the player in the tiny shoes of a poor lab mouse that finds itself captured by a giant mechanical man and placed in a very Da Vinci-like maze they need to escape from by getting to the end of 15 levels. A fairly simple-sounding premise, but the gameplay is anything but. It is impressive just how fun Tinytouchtales has made such a simple concept.

The game unfolds on a 4x4 grid where you must swipe in the direction you want the mouse to move. At the top of each round, a goal and a key are randomly placed, with the objective to grab the key and reach the goal to advance. However, there are also a few mechanical enemies sprinkled around to block our heroic mouse from progressing, with the number increasing the further you go. Each of the grid blocks gets assigned a random action that grants the individual standing on it a special ability, which to start with are simple actions such as a sword for attack, shield to defend and a bow to fire at range. To begin with, fairly straightforward, but it gets so much more complex. 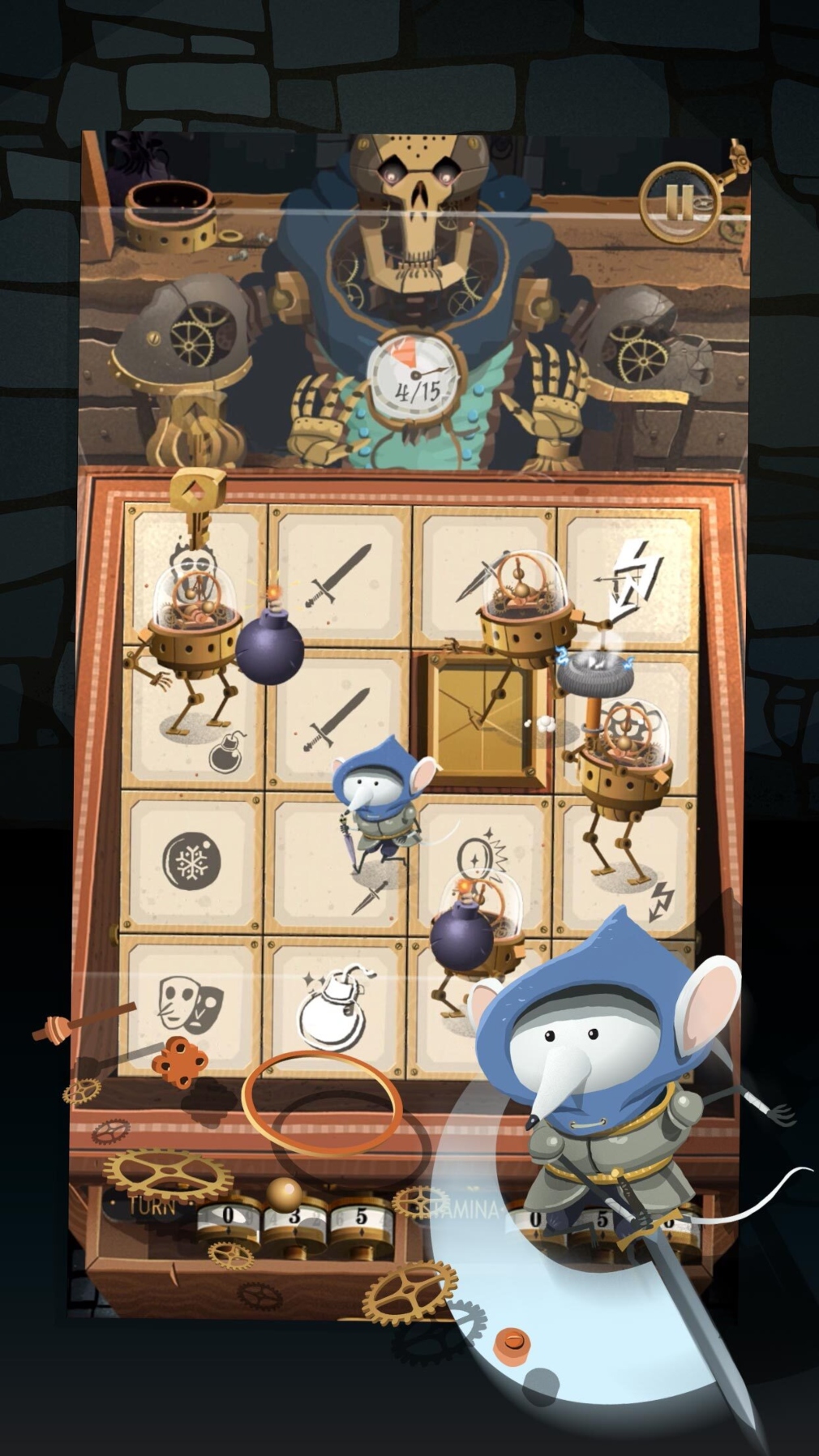 Our mousey hero has a stamina limit that carries through the full game, with each movement or action using up the bar, and it depletes incredibly fast. Every third level you can collect some cheese that will restore a bit of stamina, but in the beginning, you don’t get much, so you will be lucky if you can get past stage three or four, to begin with. Luckily, after every round the mechanical man starts to break apart, dropping gears on the grid you can collect.

Every step you make moves everything else on the grid; the mouse, enemies, keys, and gears, so you need to really think about every action, or you will utterly ruin your run. Say the key is above you, so you move up. That enemy below you has a teleporter, he's now overtaken you and grabbed the key, so now you need to chase him and lose stamina trying to kill him. 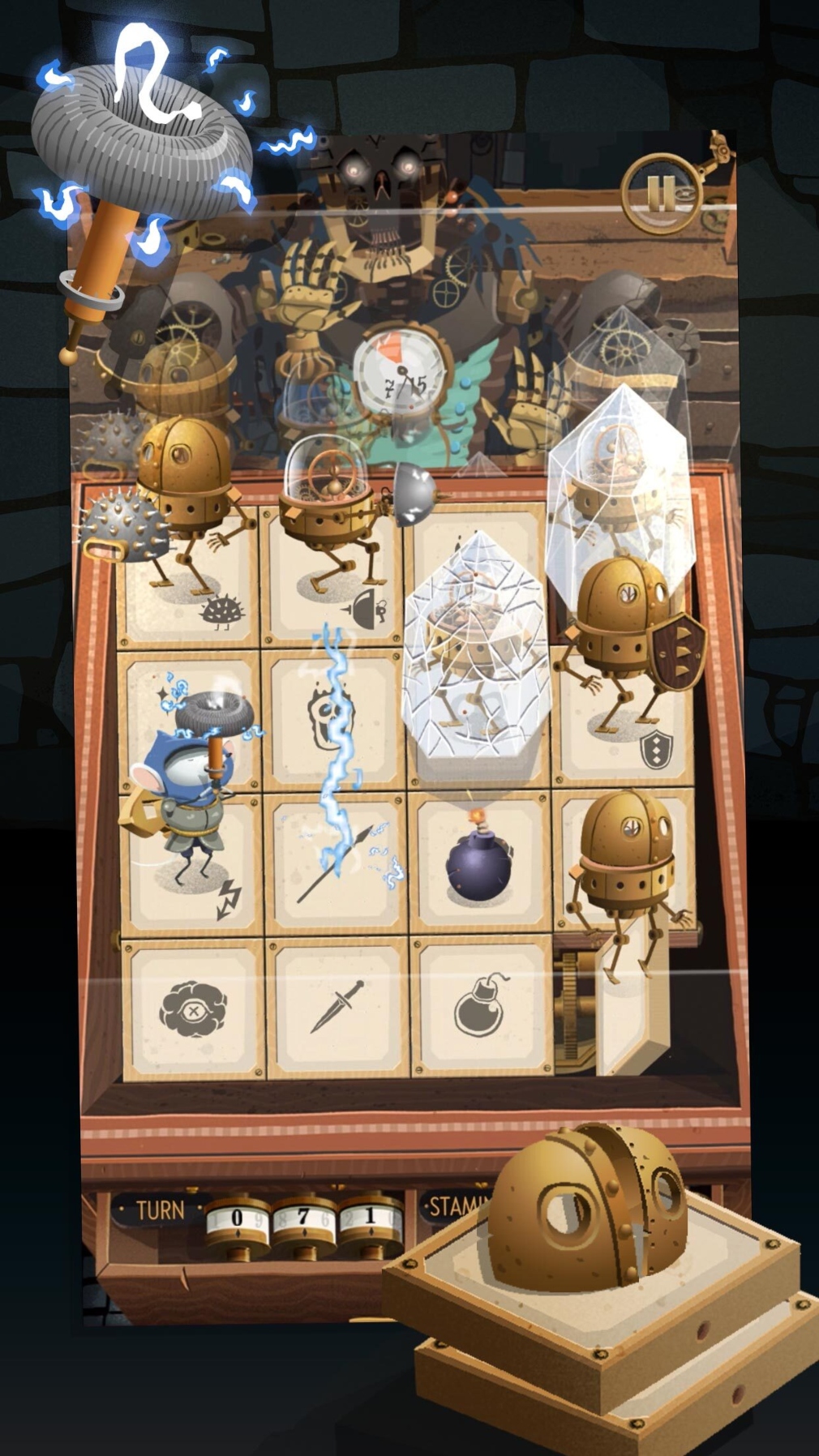 Or it's level six and you are running low on stamina, so you move towards the cheese, however, you've also activated that enemy on the rope action, he's now swung over to the cheese himself and destroyed it. If you aren't careful you can also destroy the key itself and now you are stuck on that floor forever. These are just some of the scenarios I personally faced that halted my entire run in one move, but it still manages to be so fun I immediately jumped back into it.

There are two versions of the game; free and paid. In the free version, you have access to the main story and the daily challenge, which has every player compete on a grid with predetermined rules to claim the best spot on the leaderboard. You get a lot of game time out of it, however, your gear stash is limited to 25 so at a certain point, you can’t advance the Workshop any further which is a bit of a shame. The paid version, however, only costs £1.79, which for the amount of fun the game offers is definitely worthwhile.

This version sets the gear storage limit to 60 so you can unlock more items and also unlocks two further game modes to continue the fun. Limit mode grants a hard cap of 250 turns to go through as many floors as possible without worrying about having to collect cheese, whereas Draft lets you pick between some modifiers as you go through the maze, just in case you crave more difficulty and keeping track of a mouse, five enemies and a key each move wasn't taxing enough.

Even if you stick with the free version, Maze Machina is one of the most moreish puzzle games on mobile right now and can be played for either two minutes or two hours, so there is plenty of reason to pick it up and join in the delicious suffering.

Maze Machina is a puzzle game that you'll enjoy for hours on end. After each run, you will immediately want to jump back in and see if you can better your previous attempt.
More about Maze Machina on