Root: A Game of Woodland Might and Right review - "As complex and tangled as its namesake"

When you first load up Root: A Game of Woodland Might and Right, it's easy to become overwhelmed. The tutorial is over an hour long, each of its four playable groups has a wildy different set of rules to abide by, and you'll only begin to grasp the core tenets of Root after fumbling around blindly for several hours. However, if the overly-complex rulebook and rough learning curve don't scare you away, you'll be in for one of the best strategy experience imaginable on a mobile device.

Root: A Game of Woodland Might and Right is based on the board game of the same name. It has a few discrepancies in the rulebook that some diehard Root fans may cry foul at, but as someone who had never played the board game I don't have much to complain about. In fact, as a complete newcomer to Root, I found the rulebook completely overwhelming. The rules are very different from most other games on the market – although the game's tutorial does a great job walking you through the details – and each of its four groups have a vastly different set of rules to follow.

For example, playing as the Eyrie Dynasties you'll need to carefully select a Leader and a set of Decrees to follow, adding a new Decree each turn. Fail to meet that Decree and your Leader will be deposed, forcing you to select a new one and lose a few Victory Points. Meanwhile, the Marquise de Cat troop simply has a set amount of action points it can spend each turn and doesn't require the selection of a Leader or a Decree at all. Playing as a different alliance is almost like playing a different game – make sure you spend time learning them all to find one you like.

In Root, the goal is to score 30 Victory Points before your opponent. Victory Points are earned in different ways depending on your group of choice, but it typically boils down to thwarting the movement of your opponents and slowly growing your influence on the board. Defeating enemies, building new structures, and crafting are just a few of the ways you can try to pick up Victory Points. It's a basic system, but it works well for Root since everything else about the game is so complex.

I'll be honest – I'm nearly six hours into Root and I'm still getting tripped up on forming winning strategies for some of the alliances. Marquise de Cat has become my go-to choice, as it offers a fairly straightforward play style. Others, like the Woodland Alliance, earn Victory Points by spreading sympathy across the board, and I'm still wrapping my head around the best way to play as these lovable miscreants. There's no doubt that Root offers plenty of strategizing and flexibility, but you'll need to invest a lot of time into the title to get there.

However, everything about Root makes it easy to get sucked into its world. It's 3D graphics have a hand drawn quality to them that are easy on the eyes, and it's always a joy to watch the woodland map transform during a match. Towering Eyrie Roosts will be built, Vagabonds and Woodland Alliance critters will become scattered across the map, and Marquise de Cat will slowly try to build their outposts across every node within sight. The few animations present throughout each match are also well-done, although it would have been nice to watch battles play out firsthand, as opposed to having a cloud of dust block your view before fading away to show the victors. 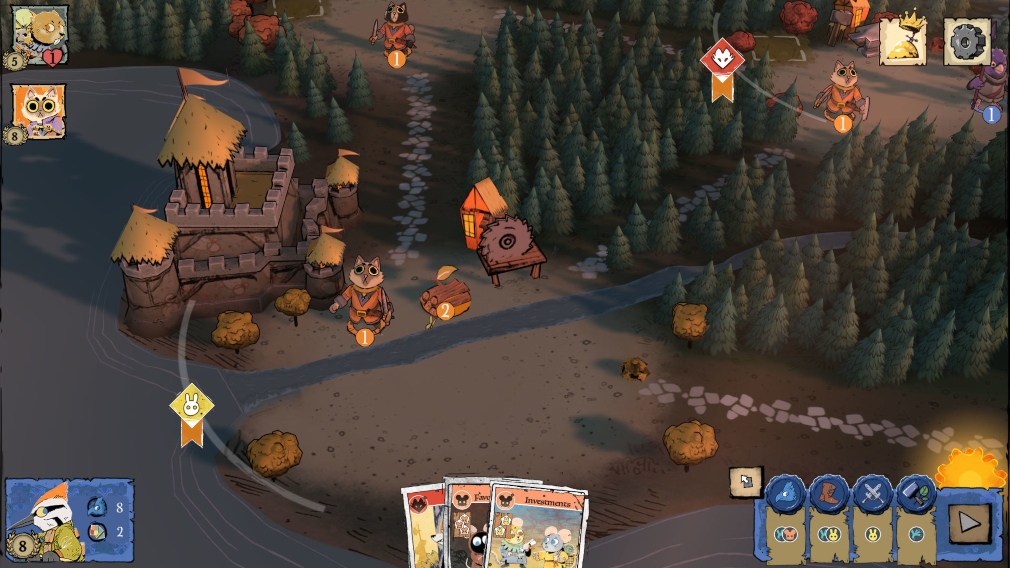 Speaking of combat, I'm incredibly fond of how Root deals with skirmishes. When you decide to enter battle, you'll be given the title of Attacker and you're target will be given the title of Defender. At this point, two dice will be rolled. The higher number is given to the Attackers while the lower number to the Defenders. Then, these numbers translate into how many units are destroyed.

For example, if I choose to move 3 units into an adjacent node with 2 enemy units, I'll become the Attacker. Two dice will be thrown, and let's say they end up being a three and a one. The three will be given to me – the Attackers – while the one will be given to my opponent – the Defenders. The game will then deal out three killing blows to the other team, while I'll receive one from the Defenders. It's a great way to encourage conflict, as Attackers will almost always have the upper hand. There are a few different tricks that Defenders can employ to even the odds, but I'll spare you the lengthy details. Suffice to say, Root offers a ridiculous amount of flexibility when it comes to combat.

Root is not for the faint of heart. It is by far one of the most complex game's I've ever played – not just on a phone, but on any platform at all. The only other title that came to mind while playing Root is Civilization VI, but even that has a fairly standard rulebook regardless of your starting civilization and is easy to understand despite a large learning curve. Root is an overly complex beast, both to its advantage and disadvantage. For those who stick with it, Root offers one of the deepest strategy experiences in gaming. However, you'll need to wade through nearly ten hours of confusion before you can even begin to grasp the intricacies of its gameplay. Root is a love letter to strategy fans around the world, and anyone looking for a deep game to sink their free time into should look no further than this woodland adventure.

Root is an absolute beast of a game, offering a completely new rulebook depending on your preferred alliance. The learning curve is one of the steepest around, but if you're bold enough to fight through the confusion you'll be rewarded with one of the most intricate games around.
More about Root on

Here are the top 10 most popular, free games for iPhone right now