By Shaun Walton
| 2 weeks ago
Android + iOS
More about NieR Reincarnation on
Available on: Android + iOS

If there is one thing that Square Enix does better than anyone, it's RPGs. With pedigree from the likes of Final Fantasy, Dragon Quest, Kingdom Hearts and Star Ocean to name a few, they could make a browser game where you walk through one doorway and win, and it would still be a masterpiece. Luckily for gamers, Square continues to put in the hard work and create amazing games, such as their mobile RPG Nier Reincarnation.

Nier Reincarnation is a turn-based RPG that takes the tried and tested genre and adds some unique tactical twists into the mix. The majority of battles feature a team of three characters battling against three waves of enemies, occasionally ending with the final wave being a boss. Characters will auto-attack, however, the majority of damage comes from the two active weapon skills, and the single character skill the player manually triggers. By chaining attacks, the combo meter raises and leads to extra damage, so timing is very important to whack out as many attacks as possible without being interrupted. It adds fun little thinking exercises over just throwing out powerful skills as they become available. 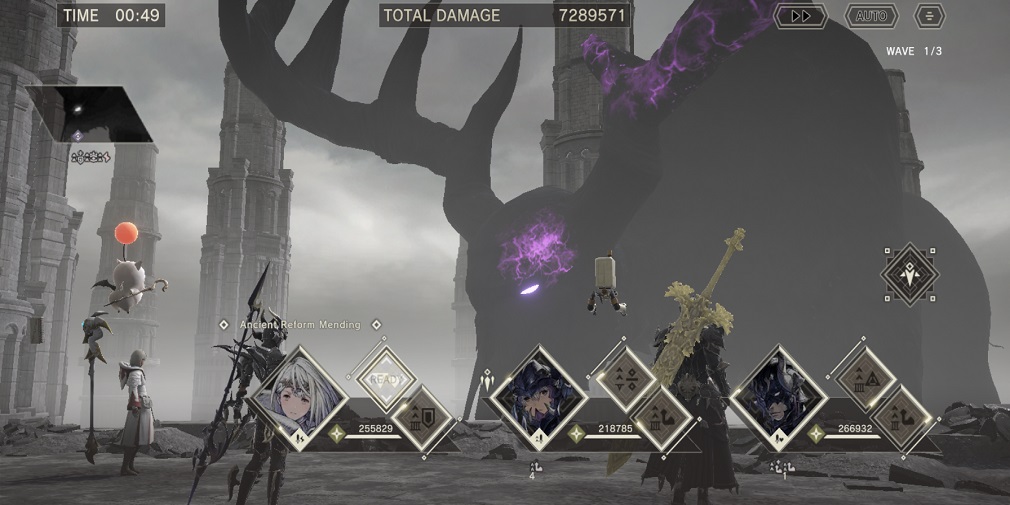 Before a battle, players need to choose what characters to put in their party and equip them with weapons, companions with buffs and skills, and with Memoirs that provide passive bonuses. It is not as simple as just picking the biggest numbers, as there is a rock paper scissor element system in play, so weapons need to be periodically cycled, which provides a good reason to collect and upgrade multiple weapons.

To get the best use out of characters and items, they need upgrading. Everything has a generic level to upgrade, which gives the standard flat stat boosts. Characters and weapons can also receive skill upgrades to make their active skills more potent, and some other upgrades to gain better stats. These are necessary to advance through the tougher quests, but thankfully the resources can be collected in multiple ways. 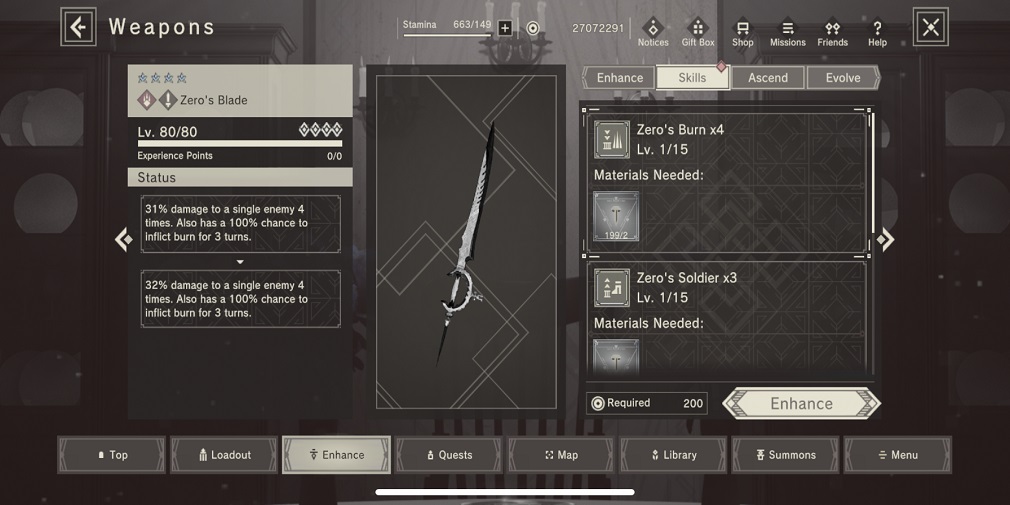 It’s hard to talk about a Yoko Taro property without delving into the storytelling. One of the main draws of the Nier and the Drakenguard series was the narrative, and Reincarnation doubles down on this with the sheer amount of storytelling it does. Each main story arc follows a protagonist who explores a mysterious place called The Cage, which houses memories of characters' lives that the player gets to relive each chapter. The character is then unlocked to add to the team, and by powering them up, gets to explore even more of their story. The sheer variety of stories Reincarnation tells is a huge testament to the writers, particularly since all of them are interesting and engaging. 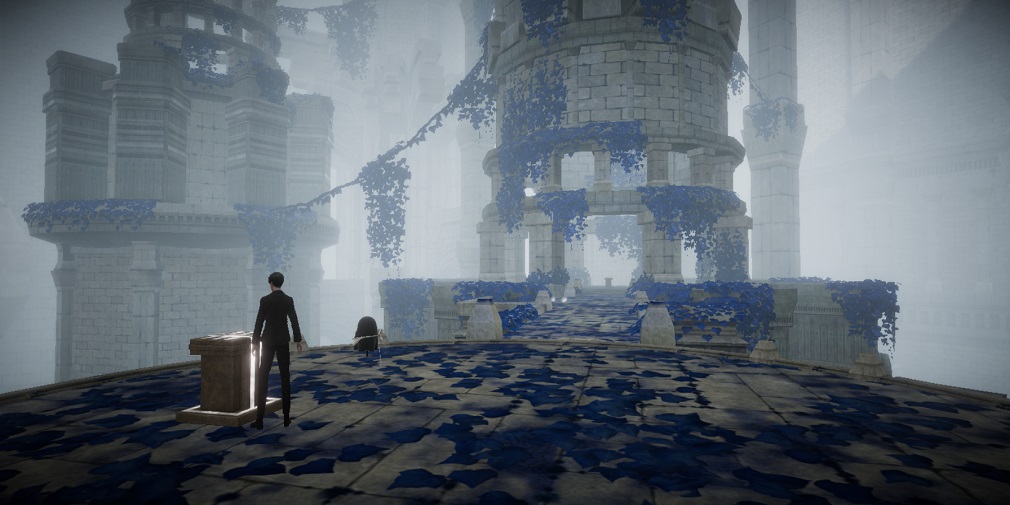 Outside of the main stories, there is a massive amount of side content to get involved with. There is always a special event happening that reveals more about a specific character, which gives special currency and a huge shop full of resources to power up characters and weapons. The Subjugation battles are huge-scale fights that require the player to kit up three teams to battle against giant enemies, a fantastic way to challenge a player's whole catalogue of characters and weapons. Dark Character Stories are Nier’s stamina-heavy grind-fests and are well worth the effort as they unlock new stories and a mega-powerful character at the end. There's plenty more to available, and modes to suit every type of player, be they hardcore or only wanting to spend five minutes a day playing. 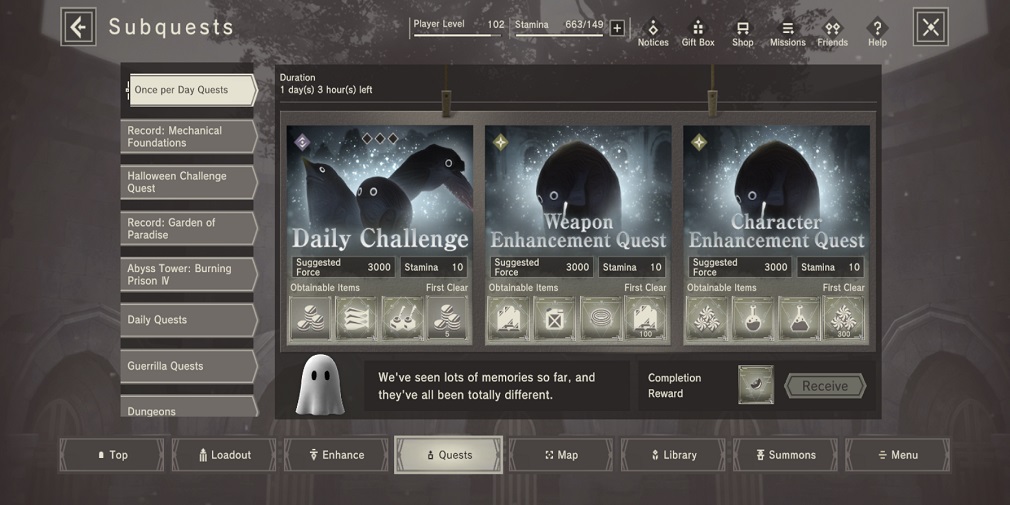 One of the things that most stands out about the game is how generous the developers are. The majority of gacha games will reward you with enough in-game currency to keep playing, but not enough to easily get event characters. Nier, on the other hand, throws its Gems at the player left, right and centre. Just the daily log-in bonuses alone will add up to at least 3,000 per month, enough for 10 pulls.

Even the mundane stuff like grinding, every event that comes around the developer's heap stamina potions on its player base, enough that you need to try very hard to run out. It makes it so even the most casual player will still be able to amass enough characters and resources to enjoy most of the content. It is hard to think of another gacha game that does this much to actively prevent players from needing to spend money to have a good time, and it is a commendable move by the developers.

It can be difficult to stand out in the turn-based gacha genre, especially if developers don’t be a lot to innovate, but Nier Reincarnation manages to take that standard formula and add enough of a twist to make the gameplay more enjoyable. The biggest draw however is definitely the stories told throughout the game, and it is well worth downloading just for that.
More about NieR Reincarnation on