Words for a bird review - "Birds get lonely too"

By Catherine Ng Dellosa
| Jul 25
Android + iOS
More about Words for a Bird on
Available on: Android + iOS

One of the worst things that can happen to a little bird in the wild is to be caged, held in captivity, and lose its freedom in the skies. While Words for a bird is literally what its title says, the game is so much more than a puzzling word game - it’s actually reflective of our current condition during this pandemic.

Words for a bird gameplay

For many of us, the unprecedented spread of the virus locked us down, much like the poor pink bird you encounter at the very start of the game. It may not seem obvious from the get-go what the story is all about, but the message becomes crystal clear once you get to the end - and it’s only a matter of time, because the game is really, really short.

Words for a Bird: Some basic tips to help you in this sentence puzzler

I didn’t expect the game to be over so soon, so I played it all over again just to be sure I didn’t miss out on anything or encounter a glitch somewhere along the way. The gameplay is ingeniously simple - you aim to complete sentences using the letters scattered across a tree, using clever clues inside a white box in the middle. Here’s the catch, though - the clues aren’t straightforward, so you really need to put on your thinking cap to decipher what each clue means. 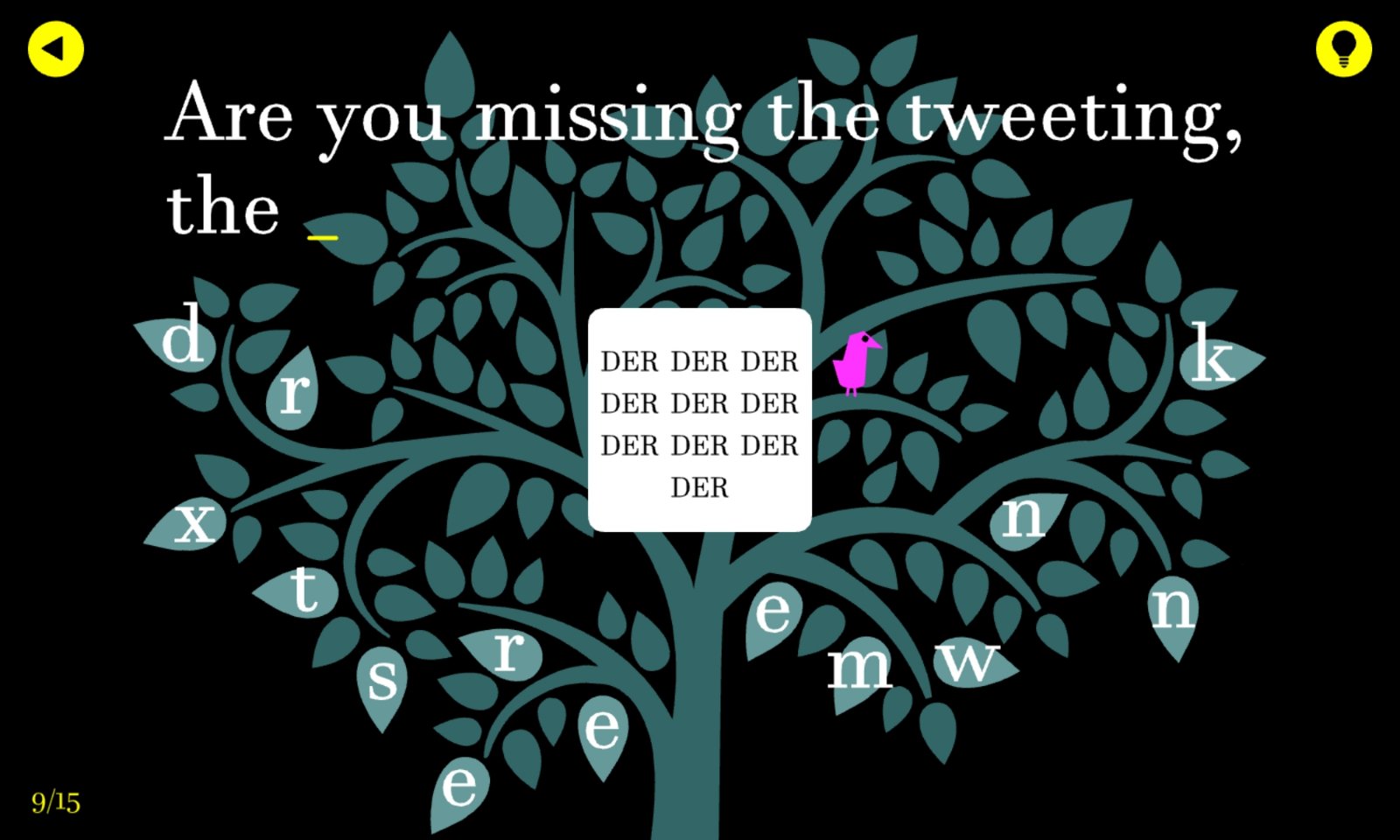 For instance, the very first clue shows the letters “A” and “L” sitting on top of a big letter “E”, which is a clue for the word “alone” - it refers to “A” and “L” on “E”. Similar clues get progressively more difficult as you go through the verse. What makes the puzzles more challenging is that you don’t need to use all the letters littered throughout the tree - some of them are just there to mix things up. You can, however, ask for some hints by tapping the lightbulb icon to lend you a helping hand. You need to watch an ad for that, but you can always shell out $1.99 to remove all ads (and support the dev in the process). 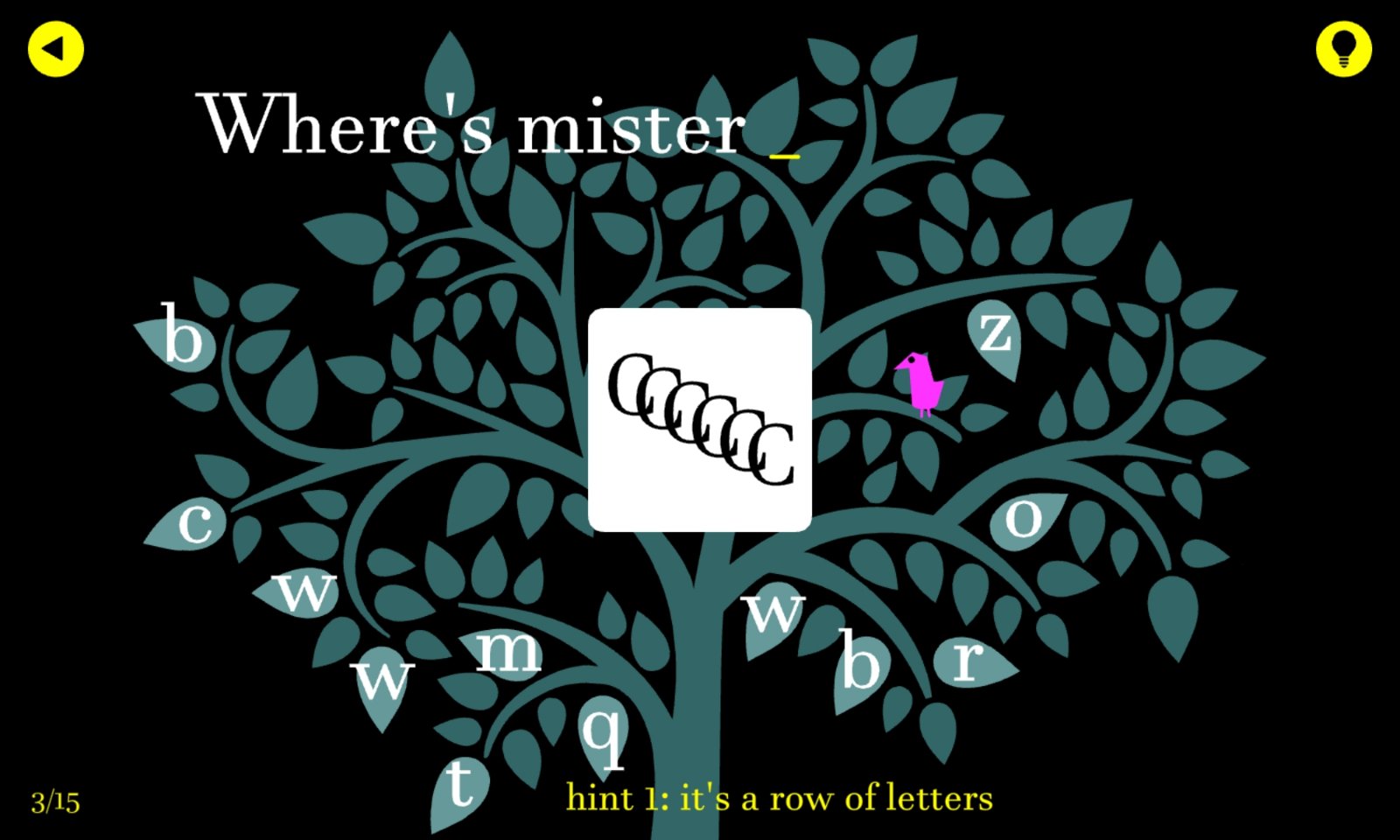 Words for a bird developer, aesthetics, and overall appeal

Speaking of the developer, Bart Bonte has made a name for himself with his quirky puzzles, such as the colour puzzle series (blue, black yellow, green, red), “sugar, sugar”, and "boo!". I admit I haven’t really heard of him before, but after playing this game, I might just pick up some of his other works. The game's overall vibe is just so relaxing - plus, the minimalist look adds to the chill atmosphere of the whole thing.

There’s funky background music to accompany your deep dive into the wonderful world of words, and, after you finish all 15-word puzzles, you’re treated to this adorable little birdie dance party complete with flashing colours and a lighthearted beat.

While Words for a bird is a short game (I finished two runs in thirty minutes, using two hints along the way), it’s still incredibly satisfying, mainly because of its touching message in the end. I’m not going to spoil it for you, of course - but suffice it to say that it’ll definitely lift your spirits up even just a little bit if you’re on lockdown during this pandemic.

Words for a Bird

Words for a bird is a short (almost too short) word puzzler that offers an encouraging message during this difficult time in the guise of a cute fill-in-the-blanks head-scratcher about a lone bird. Pick it up for a quick break from the humdrum of the daily grind, and you might just feel better about the world right after.
More about Words for a Bird on