Monster Dash review - "Back at it again"

By Sergio Velasquez
| May 4
Android + iOS
More about Monster Dash on
Available on: Android + iPhone

Back in the early days of mobile gaming, there were a few games that were so good you got addicted. One of those was Monster Dash, an endless-runner type of game filled with guns, monsters, and action.

However, as popular as this game was, it had to be taken down due to some GDPR issues.

Fortunately, it’s now 2020 and anything can happen. After a long hiatus, Monster Dash is back on the App Store and Play Store, and mobile veterans can finally go back to some good old senseless violence.

If you never played it, Monster Dash is a game developed by Halfbrick Studios. In case, you haven’t heard of them, this is the company that created some of the best mobile games available, including Fruit Ninja, Jetpack Joyride, and Dan The Man. So you know you’re in for a fun time.

You’ll join Barry Steakfries on an adventure to save the world. There are monsters and destruction everywhere, and it’s your job to get rid of them in the only way you know how: With a lot of shooting.

Monster Dash is really easy to pick up and play. Barry moves by himself, and you’ll only control when he jumps and when he shoots. You’ll go through different places and fight all kinds of monsters. All of them are easy to take down, but they’ll sometimes appear out of nowhere, making you lose a few lives. Fortunately, there are lives and powerups across each level that’ll help you go as far as you can.

The farther you go on a level, the faster you’ll run. This adds difficulty to the game, but there’s a moment when you don’t know what’s going on. Maybe I’m getting old, but when the game got too fast I couldn’t do anything but let it kill me.

Fortunately, once you die, you can choose to watch an add to continue where you left off. I don’t mind watching ads to get a checkpoint, I even see it as a win-win situation. What I don’t like, though, is that when I chose to restart the mission, I had to watch an ad as well. It’s annoying and makes the whole decision pointless.

Instead of levels, Monster Dash has missions, and there’s a lot of them. Each mission has a goal you need to reach, like going as far as you can, or high fiving zombies. To unlock a new mission, you have to get at least a bronze medal in the previous one.

Fortunately, getting bronze medals is pretty easy, and most of the time you’ll get it in your first try. But if you’re going for the gold, you’ll have to grind each mission.

At first, all these missions are fun, but you quickly realize most of them are similar and even repetitive. Don’t get me wrong, is still a fun game to play, but it’s better when you play it in small periods of time. If you’re just playing to kill some time, then Monster Dash brings a lot of fun to the table.

There’s also an Arcade, which is an endless mode to see how far you can go in a single run. It’s a nice break from the missions if you’re just looking to play without worrying about medals.

In each mission, you also have to collect as many coins as you can. These coins are used in the game’s shop. You can use the coins to level up, which gives you more lives, and better stats for Barry’s powerups. These upgrades are really helpful and necessary the more you play the game.

You can also buy guns and costumes. There are a lot of guns available and some of them are necessary to play certain missions. Plus, some guns are overpowered and make the differences between a bronze and a gold medal.

The costumes, on the other hand, are just to change your appearance. They aren’t helpful for your runs, but I swear I’d run farther if I play as Indiana Jones. Even if that’s not true, it’s a nice touch to have different costumes, and they’re one of the main reasons to get coins. Hopefully, they’ll add more in the future that doesn’t require real money. 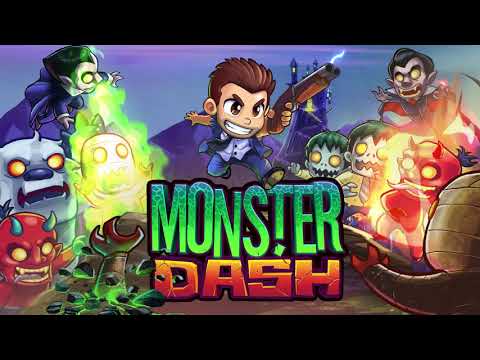 Monster Dash is a dose of nostalgia for older players, and a rush of adrenaline for the new ones. If you want a time-killer, this game is perfect. It’s simple enough to pick up and play immediately, but hard enough to be a challenge to complete. That being said, If you’re looking for a game you can play for hours on end, you might find Monster Dash to be a bit repetitive.

Overall, is great to have Monster Dash back. The game is still as fun as it was before and it’s a classic game that both new and old players should play.

Monster Dash is back on the App Store and Play Store, but is it still worth playing in 2020? It's time to go back in time to see if Barry Steakfries still has what it takes to makes us have fun. Spoiler Alert: He does.
More about Monster Dash on

Here are the top 10 most popular, free games for Android right now